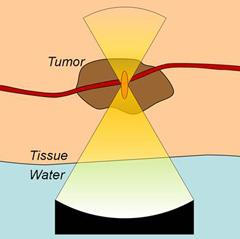 Non-invasive method to treat disease in the body.

High-Intensity Focused Ultrasound (HIFU) is a form of image-guided therapy capable of non-invasive tissue ablation and drug delivery. Similar to the concentration of light energy to a focal point using a lens, HIFU can concentrate acoustic energy within the body to a region of a few millimeters in dimension.

This energy at the focus is sufficient to thermally coagulate or "cook" tissues – rendering them permanently destroyed – without causing any damage to intervening tissues.

This field has grown significantly over the past decade and during that time, there has been the development of clinical systems, charitable foundations, and international scientific societies.