Recently we developed a benchtop HIFU system coupled to an atlas-guided stereotaxic system (left) for noninvasive targeting of brain structures for drug delivery studies (right). This system is being used in conjunction with our collaborators to investigate novel applications of MR-HIFU for targeting agents to the brain.

Read more about the system 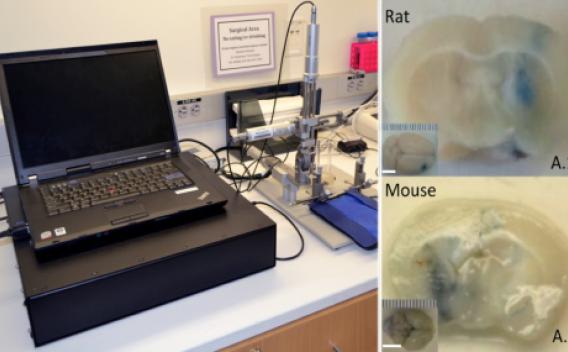 We are also developing preclinical systems that can be integrated into the clinical HIFU systems to evaluate novel techniques in small animals before moving on to human studies. An initial prototype is intended for use with the Philips Sonalleve® clinical MR-HIFU system in our department. The photo above shows this adaptor placed on the Sonalleve patient table. 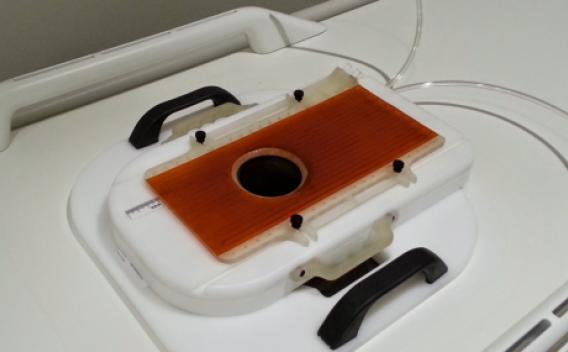 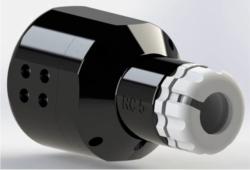 Although High-intensity Focused Ultrasound (HIFU) is capable of performing noninvasive treatments, often there are barriers to the safe delivery of ultrasound to a target site. Anatomic barriers for HIFU include bone, bowel (due to gas), lungs, and skin scars. This makes treatment of many targets in the chest, pelvis, and abdomen challenging, if not impossible, using an external device. An alternative approach is to put a HIFU transducer on a device intended to be inserted into the body, either directly into a target site or within body cavities. HIFU transducers can be made small enough to fit on the end of a catheter intended for insertion into a blood vessel and can deliver sufficient energy to coagulate tissues even at this size.

This device was translated from concept to clinical trials in Canada and is currently being commercialized by Profound Medical for the treatment of prostate cancer.

Currently, our group is evaluating other applications of these minimally invasive HIFU devices.

Previously, Dr. Chopra co-developed an MRI-compatible HIFU system for preclinical studies, which was subsequently licensed and commercialized by FUS Instruments. This system has since been adopted by labs around the world interested in conducting HIFU research.

Over the past decade, Dr. Chopra developed MRI-compatible mechatronic systems to move a HIFU transducer during therapy. One of the first devices developed in his group was an MRI-compatible rotational motor used to rotate the transurethral applicator during prostate treatments.

Recently, these concepts have been extended to the imaging domain to study the influence of motion on MR imaging. Imaging artifacts are a major source of uncertainty in abdominal MRI and understanding and quantifying their contribution to measurements of relaxation and other MR parameters are very important. An MRI-compatible programmable linear stage has been developed that can translate an abdominal phantom in the MRI during scanning. The system is shown below installed on our research 3T MRI in Radiology and moving an abdominal phantom for ongoing imaging studies.

This platform enables a detailed study of the influence of motion on quantitative MR parameters such as T1, T2, and ADC. As well, it serves as a powerful platform to evaluate different types of motion-compensation schemes. Finally, this platform can be used to evaluate the emerging MR-LINAC systems which hold the promise for real-time adaptive radiotherapy.