Azoitei, Noh et al. published a paper in the August issue of the Journal of Cell Biology determines how local changes in microtubule (MT) cytoskeleton regulate the activity of guanine nucleotide exchange factor H1 (GEF-H1), Previously, this has been suggested based on GEF-H1 knock-down studies and global, acute perturbation of MT networks by pharmacological agents. The new work establishes the relationship directly at the level of individual MTs. This result supports that GEF-H1, via its function as a RhoA activator, operates is a key integrator of MT and actin cytoskeleton in diverse cell functions.

The study relied on an interdisciplinary approach combining molecular cell biology, computer vision and statistical modeling. The Hahn lab at the University of North Carolina at Chapel Hill engineered fluorescent biosensors to measure activation of GEF-H1 at the subcellular level in living cells. They also identified an auto-inhibitory domain that is regulated by Src phosphorylation. In our lab, Philippe Roudot tracked and reconstructed >10,000 of fast growing tips of MTs in live cells; and Jungsik Noh developed a novel mathematical transformation based on Poisson point process theory to quantify the relationship between discrete MT disassembly events and continuous GEF-H1 activities. The work further investigated the spatiotemporal interplay of MT- and Src-mediated activation during cell protrusions combining this novel correlation method with our standard approaches to testing the functional coupling of molecular processes based on constitutive fluctuations of image variables. 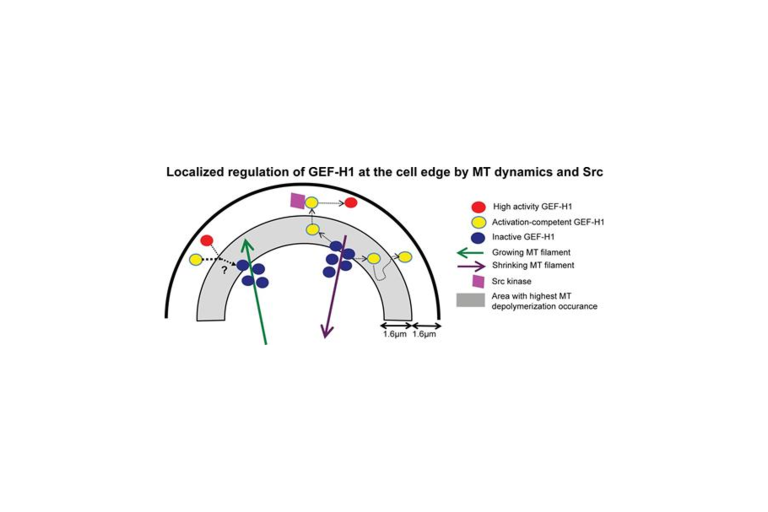 GEF-H1 is released at the cell edge by depolymerizing MTs. Upon its release, phosphorylation by Src further activates GEF-H1 and localizes it at the cell edge. While MT depolymerization occurs throughout the cell, the highest number of MT disassembly events was observed in the area ~1.6–3.2 µm from the cell boundary. Control of GEF-H1 by Src occurs in discrete locations of the region ~0–1.6 µm from the edge. Polymerizing MTs recapture and deactivate GEF-H1.