TTFields is a novel non-invasive physical modality of cancer therapy that was recently approved for recurrent and newly diagnosed glioblastoma multiforme (GBM) in combination with temozolomide, and for unresectable locally advanced or metastatic malignant pleural mesothelioma (MPM) in combination with platinum-based chemotherapy. Clinical trials are currently evaluating TTFields for other cancers, including lung, pancreatic, and ovarian cancers. TTFields are low-intensity, intermediate frequency, alternating electric fields that are applied to tumor regions and cells using non-invasive arrays. One mechanism described for TTFields-induced cell death has been via the disruption of mitosis, but the exact mechanism of TTFields’ biological action is still unknown. Our group employed genomics to study differentially expressed genes in TTFields-treated non-small cell lung cancer cells to identify molecular signaling changes underlying the differential TTFields response. We found that the genes expressed within the BRCA1 DNA-damage response were significantly downregulated during TTFields treatment. Hence, TTFields exposure immediately following ionizing radiation resulted in increased chromatid aberrations and a reduced capacity to repair DNA double strand breaks. Moreover, recent examination suggests that TTFields causes replication stress and TTFields-induced mitotic aberrations and DNA damage/replication stress events, although intimately linked to one another, are likely initiated independently of one another. These new findings provided a strong rationale for the use of TTFields as a combined modality therapy with radiation or other DNA-damaging agents such as cisplatin and/or agents that interfere with DNA repair or replication fork maintenance such as PARP1. Currently we are working on understanding the system level effects caused by TTFields exposure through trans-omics approaches comparing TTFields-induced genome, proteome and metabolome changes and to find novel therapies that could be used in combination with TTFields. The final goal is to translate these basic discoveries into therapeutic insights for patients with cancer. 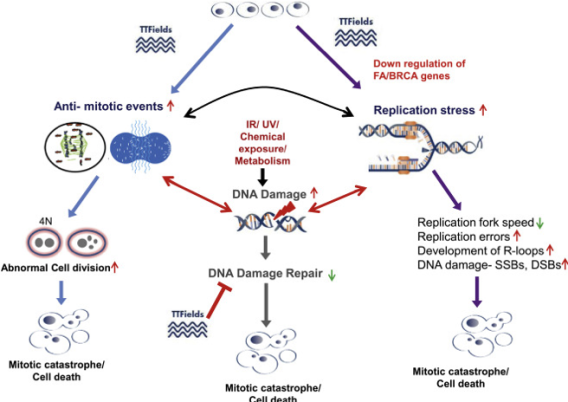 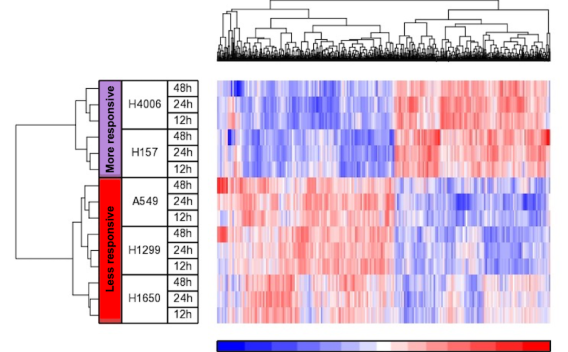