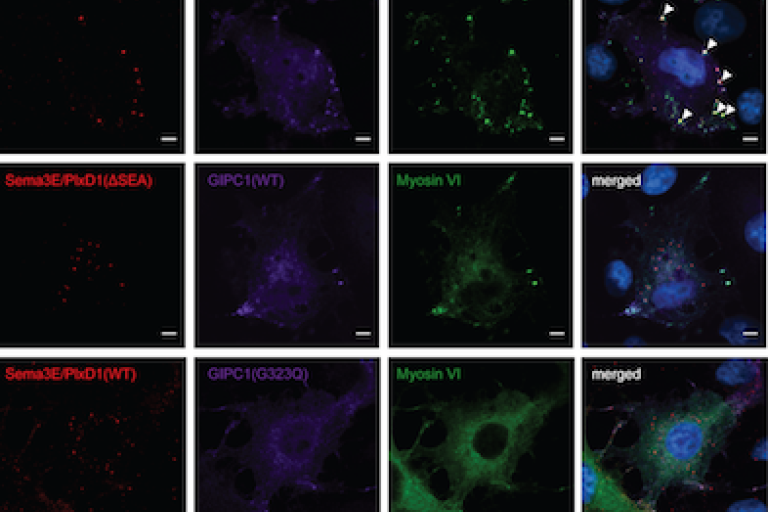 A comprehensive structural analyses show how PlexinD1 binds the adaptor protein GIPC1, releasing the autoinhibition in GIPC1 and promoting its interaction with the motor protein myosin VI. Surprisingly, GIPC and myosin VI form an alternating oligomeric complex, which may underlie their clustering and ability of powerful and processive transport of cargoes in processes such as endocytosis. (see details in: Shang et al, eLife, 2017) 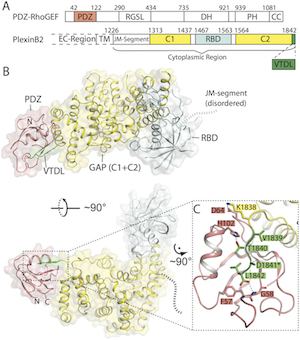 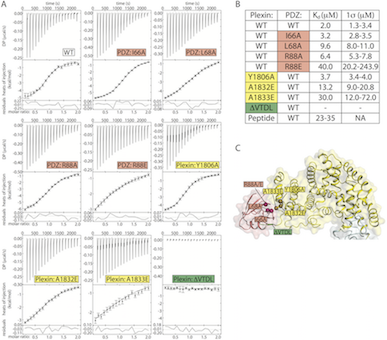 A crystal structure of the complex between PlexinB2 and the PDZ domain from PDZ-RhoGEF shows that the 3-D domains of the two proteins form a secondary interface, which increases the affinity and specificity of the interaction. Secondary interface-medited interactions may be a general specificity enhancing mechanism for modular domains. (see details in: Pascoe et al, PNAS, 2016)

Structures of the plexin active dimer and its complex with Rap 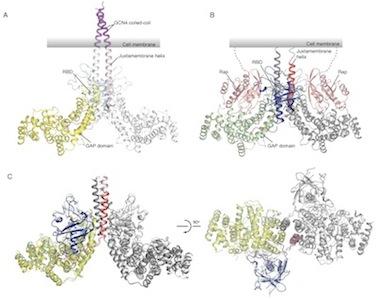 Crystal structures reveal how dimerization drives activation of the plexin cytoplasmic region, and how it catalyzes GTP hydrolysis for Rap by using a non-canonical mechanism. (see details in: Wang and Pascoe et al, eLife, 2013)

Autoinhibition of RhoGEFs FARP1 and FARP2 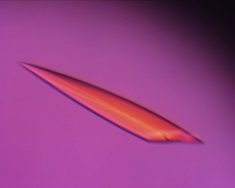 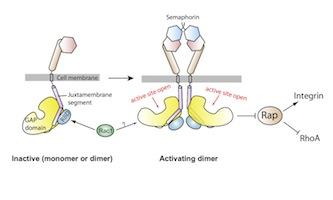 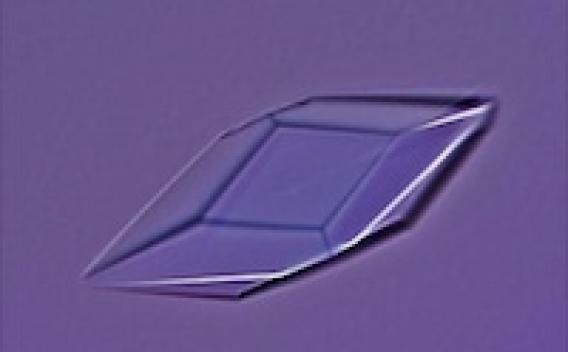 This study shows that Plexins are GTPase activating proteins specific for the small GTPase Rap. The RapGAP activity is activated by induced dimerization, and Rac1 binding does not contribute to this activation process directly. (see details in: Wang, He et al, Science Signaling, 2012)

REDD1 structure: a novel fold and a functional hotspot

Regulation mechanism of the Plexin A3 intracellular region

The GAP domain of Plexin A3 adopts an inactive conformation (left panel), which cannot accommodate Ras in its substrate binding site (middle panel). The N-terminal segment (red) and the RBD (blue) regulate the GAP through an allosteric mechanism. (see details in: He et al, PNAS, 2009; 100: 2586-2591)

Inhibition of EGFR by Mig6

Mig6 inhibits the EGFR kinase by blocking the asymmetric dimer interface in the kinase domain that is critical for activation.(see details in: Zhang et al, Nature. 2007 Nov 29;450(7170):741-4)

Activation of the EGFR kinase

EGFR activation through formation of an asymmetric dimer that mimicks the activating interaction between cyclin and CDK. (see details in: Zhang et al, Cell. 2006 Jun 16;125(6):1137-49)