A major barrier to a better understanding of the accessory olfactory system (AOS) is a lack of known natural AOS ligands. Because humans lack a mature AOS, we cannot simply use our senses to help us choose relevant stimuli (as we can with vision, somatosensation, hearing, taste, and our main olfactory sense of smell). Instead, we have to use bioassays (i.e., physiological and/or behavior experiments) to search for relevant molecules.

We have discovered that a critical class of gut sterols, called bile acids, are a new class of natural ligands for the vomeronasal system (Doyle, et al., Nature Comms. 2016). Bile acids are cholesterol derivatives that are produced by the liver and secreted into the gut, where they are required for the absorption of dietary fats. In the gut, primary bile acids (those produced by the liver) are converted to secondary bile acids by gut microbes. In the lower gut, bile acids act as ligands for receptors that play roles in glucose metabolism. Many of the secondary bile acids are neutralized/conjugated into bile salts, which are readily reabsorbed into the blood so that they can be recycled, but many of the bile acids are excreted in feces.

This is where we came in. We (Wayne Doyle) tested extracts of mouse feces for activity using our ex vivo experimental preparation (Meeks et al., Nature Neuroscience 2010). He found that feces extracts caused massive activation of the anterior accessory olfactory bulb (AOB). We collaborated with colleagues at the UT Austin Dept. of Chemistry Mass Spectrometry Facility to identify the most abundant molecules in these extracts, and they found that many of them were bile acids. Though it was not "news" that feces contain bile acids, these data did indicate that bile acids may be some of the active fecal chemosignals. It turns out that this was true. We confirmed that neurons in the AOS respond to pure bile acids at low micromolar concentrations and that different neurons are tuned to different bile acids. This suggests that there is not just one bile acid-sensing pathway, but multiple pathways.

This discovery opens new doors for understanding how the AOS uses chemical cues from different natural sources to guide social behavior. We are now actively incorporating bile acids into our existing experiments on AOB function, and are investigating other aspects of mammalian bile acid chemosensation. 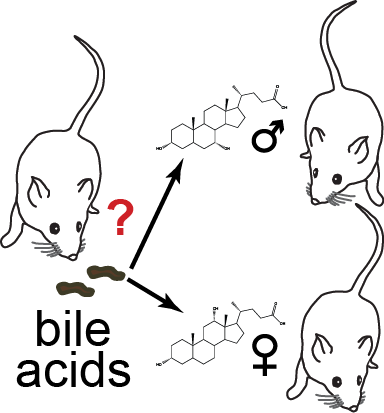