Our lab focuses on the function of the proteins that control plasma membrane function. We have on-going projects investigating ARH/LDLR endocytosis and caveolae signal transduction.

Our research has shown how the LDLR responds to low pH and low calcium concentrations to release lipoprotein in endocytic vesicles.

By modifying amino acid residues of the helical protein ankyrin (ANK), we can alter its shape. We are now developing engineered ANK-repeat protein springs for making nanodevices.

Cavin-3 is a tumor suppressor protein whose loss leads to cachexia (wasting), a frequent cause of death in cancer.

We have identified residue modification that control the shape of the helices formed by the repeats and are now developing engineered ANK-repeat protein springs for the purpose of making nanodevices. 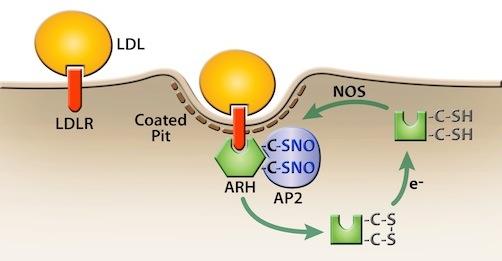 Our work has examined the molecular mechanisms responsible for this lipoprotein specificity. We have shown that the LDLR has two internalization sequences:

In recent work we showed that ARH activity requires nitrosylation, a post-translational modification of cysteine sulfhydryls by nitric oxide. Nitrosylation activates the ability of ARH to bind to components of clathrin coated pits and is necessary for ARH to drive LDLRs to this endocytic structure.

One consequence of ARH involvement is that the distribution of receptors between the cell surface and intracellular compartments shifts toward the latter. Loss of ARH function increases the number of surface receptors at steady state and this increase can improve VLDL uptake.

Thus, regulation of nitric oxide levels allows cells that use ARH to control whether the LDLR internalizes both LDL and VLDL or functions as a super-potent VLDL receptor. 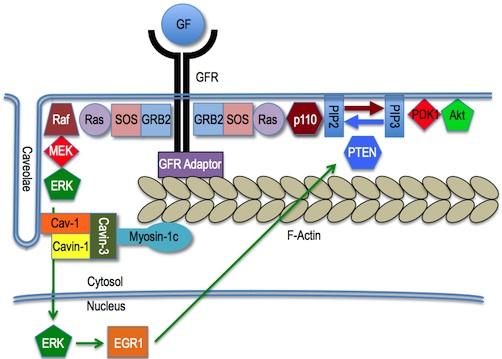 Role of cavin-3 in crosstalk between ERK and Akt

Cavin-3 (PRKCDBP, hSRBC) is a tumor suppressor protein that is commonly absent in epithelial cancers (carcinomas), particularly late in disease progression. Frequency of loss in primary tumors ranges from 50 percent to 80 percent, depending on cancer type.

Whole-body cavin-3 knockout in mice increases Akt signaling and glycolytic metabolism in the tissues, among other effects. Animals die prematurely of cachexia, a wasting syndrome characterized by severe lipodystrophy and muscle loss.

A role for cavin-3 as a bulwark against cachexia is consistent with the observation that cancers with high incidence of cancer-associated cachexia (CAC) are the cancers that most commonly lack cavin-3 expression.

The low-density lipoprotein receptor (LDLR) internalizes lipoproteins (LDL, VLDL) as part of a cycle between the cell surface and endosomes.

The cycle starts at the cell surface where the LDLR binds to lipoprotein.These LDLR-lipoprotein complexes are internalized through clathrin-coated pits into small endocytic vesicles.

These vesicles rapidly acidify and lose calcium, which together drives release of lipoprotein from the LDLR. The released lipoprotein remains in the endocytic vesicles, while the LDLR is trafficked back to the cell surface for further rounds of uptake.

Lipoprotein that is released in endocytic vesicles is trafficked to lysosomes where their cholesterol and fatty acid contents are liberated for use by the cell.

Work performed in our lab has shown how the LDLR responds to low pH and low calcium concentrations to release lipoprotein in endocytic vesicles.