A major goal of translational research is to improve the therapeutic response in patients with cancer. We are using our ongoing clinical trials as a bridge between our preclinical and translational studies.

The studies completed thus far have provided us with valuable insights into the role of innate immunity in immune-mediated tumor cell killing as a result of targeted radiation generating sterile inflammation. They have also prompted us to exploit the potential of a novel drug delivery platform to release anti-cancer agents upon activation by RT at the tumor target and its prospect to generate anti-tumor immune responses. Future studies on these topics will warrant a deeper understanding of the mechanisms underlying immune-mediated tumor inhibition by combined radiotherapy and immunotherapy.

Metastatic RCC (mRCC) continues to have poor prognosis despite recent developments. Given its high immunogenicity, immune-based treatments have been exploited in the treatment of mRCC. High-dose interleukin-2 (HD IL-2), a non-specific cytokine, has been shown to induce durable treatment response in patients with mRCC leading to its FDA approval in 1992. Immune check-point inhibitors and their combination with targeted therapy are now first-line therapy for mRCC. Although response rate has improved with the newer combination agents, complete responses remain poor and both short- and long-term serious toxicities remain a challenge.

One strategy to improve the response rate without potentially increasing side effect in patients with mRCC is to induce a tumor-specific immune response by combining current immune-based therapies with stereotactic ablative body radiation (SAbR). SAbR is thought to enhance anti-tumor immunity by facilitating tumor breakdown, antigen presentation, and T-cell function in addition to a wide range of immune modulating effects, which may synergize with immune therapies. In one of the largest retrospective studies, we have recently published our experience of the safety and efficacy of such combination in patients.

Given its well-known immune-enhancing effects, we hypothesized that adding SAbR will improve the historically reported 20-25% response rate and 7-9% complete response with HD IL-2 in patients with metastatic clear cell RCC. This trial has currently completed accrual and translational studies are being performed to investigate the role of SABR+IL-2 in eliciting an antitumor response mediated by the patients’ immune systems. These studies will enable us to gain deeper insight into the potential influence of tumor neo-antigen on adaptive immune system, leading to anti-tumor immunity in these patients. 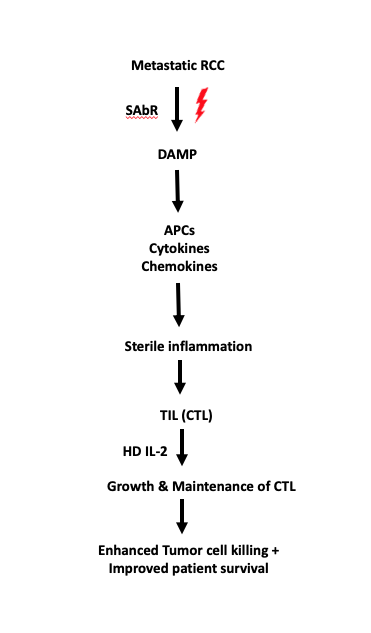 A unique feature of renal cell carcinoma (RCC) is its ability to invade the venous system to form a tumor thrombus in the inferior vena cava (IVC-TT), which may extend as high as the right atrium. Nevertheless, at least 4-10% of patients are still diagnosed with advanced disease and IVC-TT. Surgery is the mainstay of treatment for these patients and the only one with curative potential. However, due to its high complexity, surgery harbors high risk of perioperative morbidity and mortality. Furthermore, despite extirpative surgery, these patients are at high risk of recurrence, emphasizing the need for additional methods to reduce recurrence rates. Contemporary reports indicate that RCC is sensitive to extremely hypofractionated radiation therapy, such as stereotactic body radiation therapy (SBRT). Initial reports, including those from our group, further indicate that SBRT may be effective for treating RCC IVC-TT in specific settings.

Based on our previous experience with SBRT for IVC-TT, we initiated a safety lead-in phase II study aimed to evaluate a multimodal treatment approach including neoadjuvant SBRT for IVC-TT followed by radical nephrectomy and thrombectomy. We have completed the safety lead-in portion of this trial to confirm the safety of this approach. Interestingly, we noticed complete abscopal response in one patient and a partial response in another, even in this small cohort size. The translational studies that correlate the benefit of RT with patient response include the analysis of radiated thrombus, primary tumor and patient blood for immune components and investigation of T-cell receptor repertoire in tumor and circulation. In addition, the involvement of an antitumor response from SAbR is also being analyzed by next generation sequencing.

The specificity of monoclonal antibodies (mAb) combined with the high sensitivity of positron emission tomography makes iPET a highly effective, quantitative, non-invasive technique for disease diagnosis, prognosis, and response to therapy. Recent iPET advancements have allowed us to target immune cells and protein components of the immune system in real time using the specificity of mAb.

Renal cell carcinoma (RCC) is resistant to conventional therapy, but is responsive to hypofractionated radiation (HRT) and immunotherapy. Furthermore, HRT might synergize with immune checkpoint inhibitors (ICI). Despite the synergy, most patients progress because of therapeutic resistance. Adaptive resistance of increased programmed cell death ligand 1 (PD-L1) in response to PD-1/L1 directed therapy as well as HRT has been reported. However, this mechanism has not been verified in real time in vivo. Confirming this hypothesis will require multiple invasive biopsies of metastatic sites before and during therapy. Furthermore, due to inter- and intra-lesional heterogeneity of metastasis, we expect variable degrees of temporal and spatial adaptive resistance that may not be captured by biopsy. As a first step toward non-invasive real-time imaging of patients, we have reported the feasibility of immuno-positron emission tomography (iPET) with 89Zr labeled anti-PD-L1 mAb atezolizumab (ATZ) for tracking the dynamic changes in PD-L1 expression in vivo in response to HRT in RCC patient-derived xenograft (PDX) mouse models. In the future, our lab, in collaboration with other labs at UTSW, plan to implement this novel technique to detect the same or other proteins in similar PDX models with patient-derived tumors of different origins. 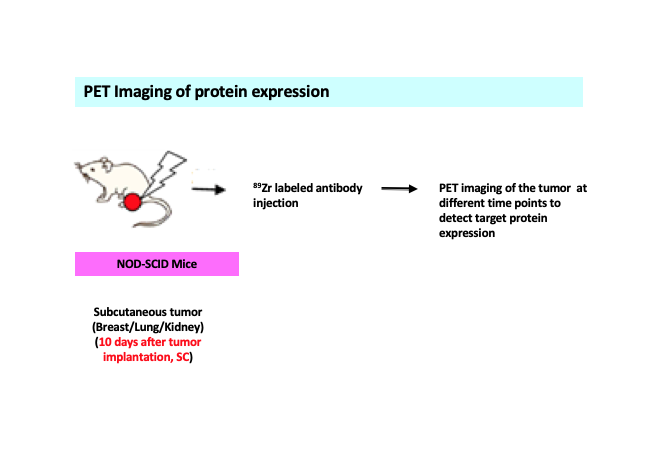 Figure legend: A schematic representing detection of target protein expression following targeted radiation of the tumor. Subcutaneous or flank model of tumors from different origins (kidney/breast/lung) expressing protein of interest in a suitable mouse model is injected with 89Zr labeled –antibody specific for the protein. PET imaging is done in different time points to detect protein expression levels in the tumor.