The bacteria that cause the deadly lung disease tuberculosis appear to facilitate their own spread by producing a molecule that triggers cough, a new study led by UT Southwestern Medical Center researchers shows. The findings, published online today, in Cell, could lead to new ways to prevent the spread of tuberculosis, which is responsible for the death of more than 1.5 million people per year worldwide.

People have known since ancient times that coughing is a primary symptom of tuberculosis and that cough allows for the spread of disease from person to person. However, the cause of tuberculosis-related coughs has been unclear says study leader Michael Shiloh, M.D., Ph.D., an associate professor in UTSW’s Department of Internal Medicine’s Division of Infectious Disease and Department of Microbiology. The prevailing hypothesis has been that coughing is triggered by infection-induced lung irritation and inflammation, but this has never been definitively proved.

Shiloh and his colleagues had a different idea: They speculated that the bacterial agent that causes tuberculosis, Mycobacterium tuberculosis, itself might produce a substance that triggers nerves in the airway responsible for causing someone with the disease to cough, thereby allowing for propagation of disease.

Amid growing concern about pathogens becoming more drug-resistant worldwide – and emerging new pathogens that have no current treatment – UT Southwestern has been selected to lead a five-year investigation into a promising new approach for controlling infections funded by a grant of up to $37 million.

The National Institutes of Health (NIH)-funded program will be headed by Dr. Beth Levine, Director of UT Southwestern’s Center for Autophagy Research and a Professor of Internal Medicine and Microbiology. She will serve as Program Director over five separate research projects at UT Southwestern and across the country – all focused on the potential to exploit a cellular process known as autophagy to destroy invading bacteria and viruses.

“During autophagy, the target to be destroyed is encased in a double-membrane compartment inside the cell called an autophagosome, which then merges with other compartments containing enzymes and acids to degrade the target,” said Dr. Michael Shiloh, Associate Professor of Internal Medicine and Microbiology, who will assist Dr. Levine as the program’s Associate Director.

A role for Smurf1 in Mtb infection

Congratulations Luis Franco and the rest of the team for his publication in Cell Host & Microbe demonstrating an important role for the host protein Smurf1 in Mtb pathogenesis. This work was highlighted in the UTSW Center Times and other news outlets. 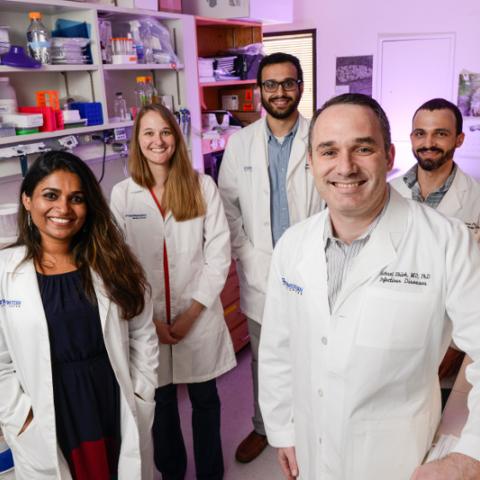 A role for M cells in Mtb pathogenesis

Congratulations to Vidhya Nair and everyone who participated in this project. After years of hard work and perseverance, Vidhya's paper showing a functional role for M cells in Mtb pathogenesis was published in Cell Reports. It was also highlighted in the UTSW news section, as well as many other news articles.

Congratulations to 3 members of the Shiloh Lab for their selection to prestigious NIH fellowships in 2016. These awards are a testament to their hard work and determination.

A role for cGAS in tuberculosis infection

In a collaboration between the Shiloh Lab and the Chen Lab at UTSW, we found that the enzyme cGAS is vital for detection of intracellular M. tuberculosis. Importantly, cGAS was first discovered by the Chen Lab in 2012. The key findings of the new paper are that cGAS is found in human tuberculosis lesions and cGAS is induced by M. tuberculosis infection. cGAS is essential for activating macrophages to produce interferons and activate autophagy, and cGAS deficient macrophages and mice are more susceptible to tuberculosis. 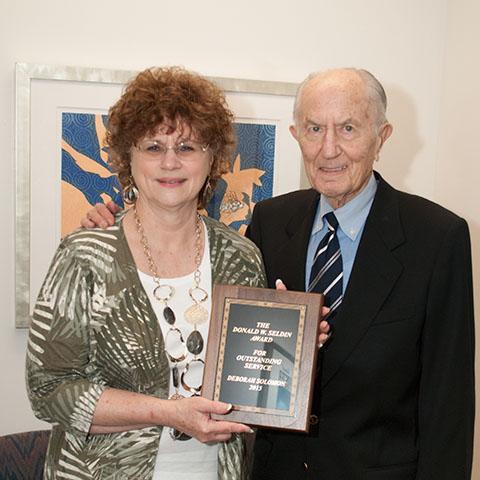 Debbie Solomon, ID Division grants specialist and our lab administrator received the Donald Seldin Award for the most outstanding administrator in Internal Medicine. This award is given to only one administrator every year, and is the highest honor for an administrator in our Department. Debbie makes our lab function, and she is amazing at managing complex grants! Congratulations Debbie! 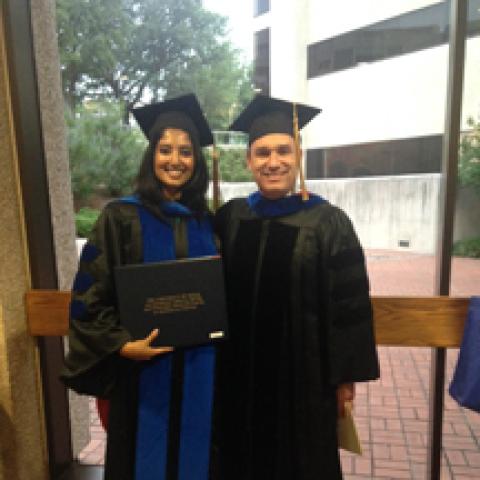 Vineetha graduates with her PhD

Congratulations to Vineetha Zacharia, PhD, on her graduation from UT Southwestern Graduate School. Vineetha is off to UC Berkeley for a post-doc. We wish her all the best in her career. 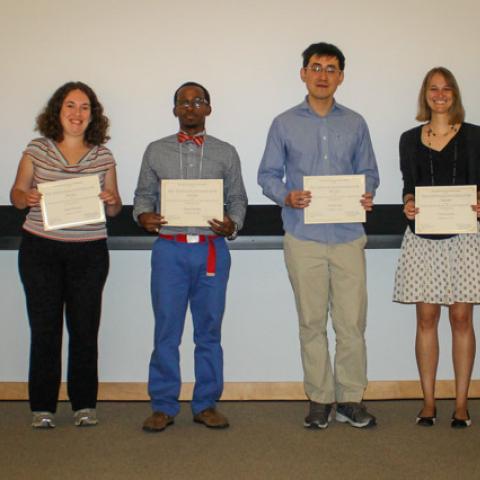 Congratulations to Chelsea for recently winning two awards. First, is the Philanthropic Educational Organization (PEO) Scholarship. Chelsea is one of 4 UTSW awardees out of 85 total recipients! This is quite a prestigious award, recognizing outstanding women in graduate school.

Congratulations to both Chelsea Stamm (Phd student) and Caitlyn Scharn (Post-doc) on their selection to be supported by the highly competitive NIH T32 training grants in Molecular Microbiology (Chelsea) and Immunology (Caitlyn).

The Shiloh Lab warmly welcomes Dr. Caitlyn Scharn to the lab. Caitlyn graduated from Creighton University with a PhD in Microbiology, with a thesis titled " Movement and Stability of the Staphylococcal Cassette Chromosome mec among Staphylococcus aureus." Caitlyn aims to leverage her extensive background in bacterial genetics to questions of M. tuberculosis pathogenesis.

Congratulations to Vineetha on the publication of her first author paper in mBio describing Cor, a novel CO resistance gene from M. tuberculosis.

Working together with Paolo Manzanillo and Jeffery Cox at UCSF, Angela Collins and Dr. Shiloh demonstrate that the ubiquitin ligase parkin is expressed in human tuberculosis lesions and that parkin colocalizes with Mtb in infected tissues. This was published as an article in Nature.

Congratulations to Angela Collins on being selected for a travel award and oral presentation at the American Association of Immunology meeting, May 2013.

Congratulations to Vineetha Zacharia on receiving a poster award at the 2013 Gordon Conference on Nitric Oxide, February 2013.