Localized, dendritic protein synthesis and its role in synaptic plasticity and neurodevelopmental disorders

Neurons have a uniquely elaborate cell structure that is characterized by numerous processes, or dendrites, extending over 0.5mm that receive, on average, 10,000 synaptic contacts.  To mediate long-term changes in function and structure of such numerous contacts, somewhat independently, neurons utilize “localized” protein synthesis within dendrites and near synapses.  We have intensively studied a form of long-term synaptic weakening or depression in the hippocampus induced by activation of a Gq coupled, metabotropic glutamate receptor, mGluR5, that relies on the rapid synthesis of new proteins in dendrites, termed mGluR-LTD.  Through the study of mGluR-LTD, we have revealed signaling pathways by which neurotransmitters regulate localized protein synthesis in neurons, what proteins are synthesized that lead to synaptic plasticity and how human disease-linked genes regulate localized protein synthesis and synaptic plasticity.

We discovered alterations in mGluR-LTD in a mouse model of the mouse model of Fragile X Syndrome (FXS), the most common inherited cause of intellectual disability and a leading genetic cause of autism. FXS is caused by loss of function mutations in Fragile X Mental Retardation Protein (FMRP), a dendritic RNA binding protein.  Importantly, mGluR-LTD is abnormal in many other mouse models of autism, many of which are caused by mutations in translational regulators.  In a collaboration with Dr. Joel Richter, at U Mass Worcester, funded by the Simons Foundation Autism Research Initiative, we are utilizing ribosomal profiling combined with RNA sequencing to identify genome-wide, translated mRNAs during mGluR-LTD and commonly mistranslated mRNAs among mouse autism mouse models and test the contribution of these mRNAs to disease phenotypes (Liu et al., 2019) 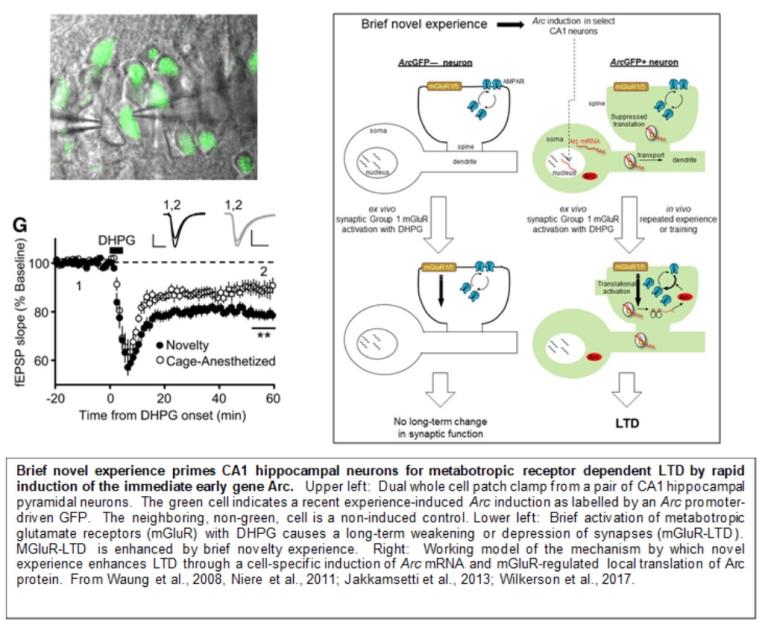