Aberrant signaling through cytokine receptors and their downstream signaling pathways is a major oncogenic mechanism underlying hematopoietic malignancies. To better understand how these pathways become pathologically activated and to potentially identify new drivers of hematopoietic cancers, we developed a high-throughput functional screening approach using ex vivo mutagenesis with the Sleeping Beauty transposon (Guo et al., Cancer Research, 2016). We analyzed over 1000 transposon-mutagenized pools of Ba/F3 cells, an IL-3-dependent pro-B cell line, which acquired cytokine independence and tumor-forming ability. Recurrent transposon insertions could be mapped to genes in the JAK/STAT and MAPK pathways, confirming the ability of this strategy to identify known oncogenic components of cytokine signaling pathways. Additionally, recurrent insertions were identified in a large set of genes that have been found to be mutated in leukemia or associated with survival, but were not previously linked to the JAK/STAT or MAPK pathways nor shown to functionally contribute to leukemogenesis. Forced expression of these novel genes resulted in IL-3-independent growth in vitro and tumorigenesis in vivo, validating this mutagenesis-based approach for identifying new genes that promote cytokine signaling and leukemogenesis. Taken together, these findings provided a broadly applicable approach for classifying functionally relevant genes in diverse malignancies and offer new insights into the impact of cytokine signaling on leukemia development. 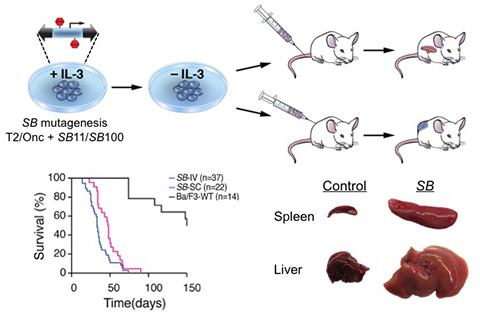