Generating new beta cells for replacement or regenerative therapies is a major goal for the treatment of diabetes. This approach depends upon defining the step-wise developmental mechanisms regulating endocrine cell fate from progenitors to differentiated beta cells.

During embryonic development, pancreatic multipotent progenitor cells (MPCs) arise from the pancreatic epithelium. This epithelium undergoes dramatic changes, including a transient period of development characterized by rapid stratification, microlumen formation, and branching. MPCs give rise to endocrine, exocrine, and ductal lineages, and comprise a heterogeneous but poorly understood cell population. However, it remains unknown whether this striking epithelial architecture is important to cell fate.

We aim to delineate the molecular underpinnings of epithelial dynamics, the niche it provides to MPCs, and the molecules that drive its expansion and differentiation into pancreatic cell types. Exploiting our understanding of developmental mechanisms in the pancreas has implications for future therapeutic targets of diabetes. 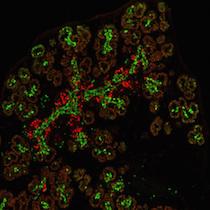 Birth of endocrine progenitors among multipotent pancreatic cells at E15.5. 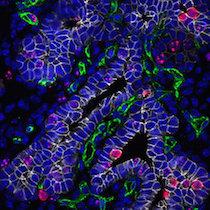 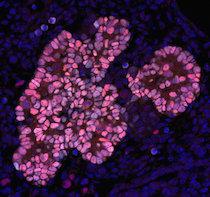