We have discovered a critical missing piece in the basal repression machinery of Shh signaling. The cAMP-activated protein kinase A (PKA) is pivotal in the processing of Gli2/3 into the GliRs; however, the pathways that mediate this activation of PKA remain unknown. We have identified a novel ciliary GPCR, Gpr161, which prevents Gli3R formation by cAMP signaling. Utilizing a variety of biochemical, cell biological and reverse genetic approaches, we will better define the role of this new repression mechanism in Shh-mediated signaling and oncogenesis.

Characterization of this novel pathway also provides us with a fundamentally new strategy for therapeutic intervention in Shh-dependent tumors, and for bypassing tumor resistance to available drugs.

The role of basal repression of Shh signaling in pathogenesis of medulloblastoma is not known. Here, we establish Gpr161 as a bona fide tumor suppressor in Shh-MB. Multiple lines of evidence including RNASeq analysis and immunohistochemistry group the Shh-MB tumors in Gpr161 conditional knockout mice with SmoM2-induced tumors in mice and human SHH-MB. To our knowledge this is the only rhodopsin family GPCR to be implicated in medulloblastoma pathogenesis. We also note a striking correlation between lower levels of GPR161 transcript and tumor progression in SHH-MB patients, but not in other subtypes of medulloblastoma. Thus, Gpr161 levels might also play a role in progression of human SHH-MB tumors and be useful as a prognostic biomarker. Based on these results, other factors that traffic Gpr161 to cilia, including IFT-A subunits, and tubby family adapters such as Tulp3 and Tubby, and predicted downstream factors in basal Shh suppression such as Gas, and cilia localized adenylyl cyclases might be important factors to include in prognosis of Shh-MB tumors (Shimada et al., 2018).

The incidence and location of tumorigenesis corresponded to the timing of Gpr161 deletion, with (a) earlier and/or more complete deletion in cerebellar anlage using Nestin-Cre resulting in high incidence of tumors throughout the cerebellum, and (b) later deletion in NSC and GC progenitor-restricted lineages with hGFAP-Cre and Atoh1-Cre, respectively resulting in preponderance of cerebellar tumors in the posterior lobes. Gpr161 deletion increased Shh signaling and proliferation of GC progenitors in the EGL postnatally. In addition, both generation and proliferation of GC progenitors in the uRL and formative EGL, respectively, were increased in the cerebellar anlage, along with premature upregulation of Shh signaling. Deregulation of additional pathways that could contribute to tumorigenesis include but are not restricted to: (a) neoplastic transformation resulting from upregulation of N-myc; (b) upregulation of Atoh1 that facilitates embryonic, postnatal and neoplastic proliferation promoting tumorigenesis; (c) accumulating DNA damage in the EGL and in the tumors of Gpr161 conditional knockout mice, as assessed by gH2AX immunostaining; and (d) upregulation of markers of rare quiescent stem cells such as Sox2 that drives Shh-MB growth and relapse. 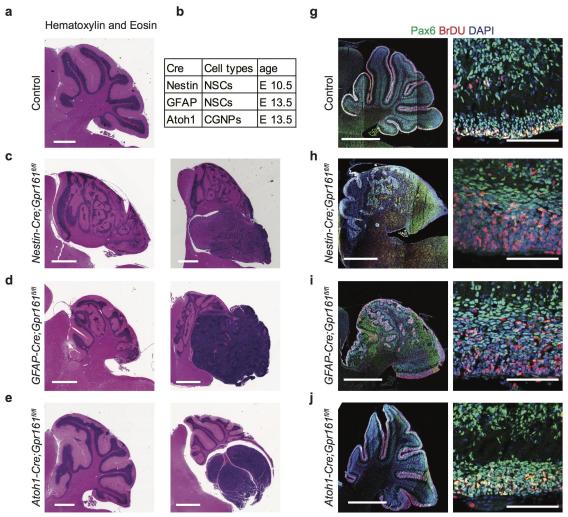 Gpr161 is a tumor suppressor in medulloblastoma formation