Removal of Proteins from Cilia

Removal of proteins from cilia

Dynamic changes in membrane protein composition of the primary cilium are central to development and homeostasis, but we know little about mechanisms regulating membrane protein flux. Stimulation of the sonic hedgehog (Shh) pathway in vertebrates results in accumulation and activation of the effector Smoothened within cilia, and concomitant disappearance of a negative regulator, the orphan GPCR, Gpr161.

While Gpr161 is normally localized to cilia, its levels are reduced sharply upon Shh signaling (t1/2 ~30 min) (Mukhopadhyay et al., 2013). We have determined the rate of entry of Gpr161 to cilia in the endogenous context upon depleting the ciliary pools by Shh signaling, and tracking reversible entry. These experiments suggest that similar to Smo, entry of Gpr161 occurs gradually over hours (Pal et al., 2016). Once inside cilia, the rate of GPCR loss is minimal under basal conditions (Chih et al., 2012; Hu et al., 2010). However, addition of agonists (in case of somatostatin receptor 3 (Sstr3)) (Green et al., 2016), and as we show that activation of the Shh pathway (in case of Gpr161) (Pal et al., 2016) result in their removal from cilia rapidly. Removal of Sstr3 from cilia occurs through -arrestin recruitment upon addition of agonists, similar to agonist-induced endocytosis of GPCRs from plasma membrane (Green et al., 2016). However, we show that Gpr161 removal involves Smo trafficking to cilia (Pal et al., 2016). While basal -arrestin recruitment by Gpr161 depends both on its constitutive cAMP signaling and the Grk2 kinase, trafficking of Smo into cilia results in increased recruitment of -arrestins to the Gpr161 proximal C-terminal tail. The -arrestin bound Gpr161 is finally removed by clathrin-mediated endocytosis upon exit from cilia.

The mechanism underlying Smo-mediated enhancement of -arrestin recruitment by Gpr161 is currently unknown, but does not involve either Gi recruitment by Smo or Grk2-mediated phosphorylation at the Smo C-tail. Rather, direct interactions between Gpr161 and Smo might promote simultaneous exit of the Gpr161-Smo bipartite receptor complex (Kim et al., 2015; Pal et al., 2016). Mechanisms determining dynamic compartmentalization of Gpr161 in cilia define a new paradigm for down-regulation of GPCRs during developmental signaling from a specialized subcellular compartment. 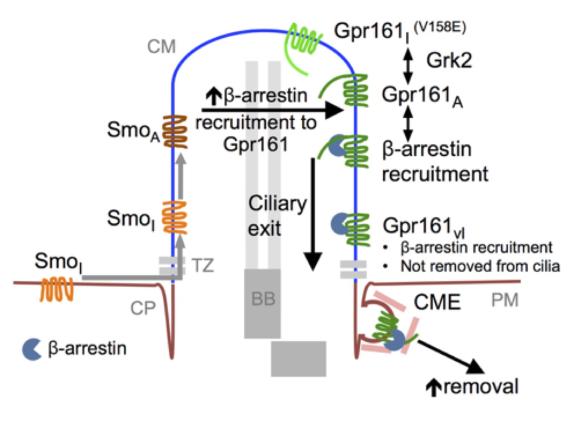